skip to main | skip to sidebar

Since most professions require level 25 to get to the next level I pushed myself to level Pazi this weekend (starting with level 21 on friday).

I got a bit lucky. For instance there is a level27-quest that wants you to gather some green slime from a mob in Gnomeregan. I was in Ironforge when someone looked for members for Gnomeregan. So I went to Gnomeregan and low and behold they killed all the mobs leading to the instance including some with slime. Easy experience :D (3300+). I consider to do the follow-up (level30-quest) in the near future - the only hard part is to sneak through (much easier now because I have a Parachute Cloak and a Gnomish Cloaking Device). I did the two quests in Blackfathom Deeps.

It took me somewhere around an hour to heal through the quest "The Absent Minded Prospector" in Darkshore (and follow-ups till Menethil). I then did the escort-quest "The Sleeper Has Awakened" and this time I didn't follow the road but ran through the woods - no spawned mobs.

I now have everything explored that is below level 30 (Thousand Needels is THE place to get iron). Next area on my list is Arathi, Desolace (got both flightpoints already and Desolace is half done - guess I had some experience-loss there).

While I was exploring Silverpine Forest I visited Alterac Mountains at the Lordamere Lake and saw many fishpools of Raw Greater Sagefish. I mean a fishpool like every 50 yards, no hostile mobs -> great opportunity to fish. So I did, and fished about 4 stacks not thinking that anybody would ever buy them (I have 4 80s with maxed cooking-skill and I never used Sagefish to skill cooking) but that I can use them to skill later. I used to skill cooking with raptor meat/eggs at that stage but since I can't kill them I would have to buy the materials. To my surprise auctioneer told me that each fish (!!!) is worth ~3.60g - yeay I learned by now that this server has wicked prices but that .... Sunday morning I sold every fish (not by one toon but by four different toons) - sold them for ~18g for 5 fish. Yeah baby, I'm now the proud owner of 7 bank-slots with a neatherweavebag each + 4 of these on me and I still have 300g. So I went to Lordamere Lake again on sunday evening and there was only one fishpool and that one could not be fished (not deep enough). I logged off, waited 45min, logged in - still no pools ... weird. Have to check this evening or maybe have to wait after a server-reset.

Anyway I guess its getting harder to get quests now so I'm finally at the point where I have to PvP - I have the WSG-daily in my log. I have one open dungeon-quest (Gnomeregan). There is an escort-quest available at some point from maestras post in Ashenvale "Supplies to Auberdine" (not sure if it needs some pre-quests). Also there is the escorte/escape-quest in Redridge Mountains "Missing In Action". Some quests await me in the Wetlands "Fall of Dun Modr", "Uncovering the Past", "MacKreel's Moonshine" (one of my favourits because 3000exp + 55s for something so trivial is huge), "The Thandol Span" (+follow ups), "Plea To The Alliance" and "James Hyal". When I get closer to level 30 it will open up a questchain in Ashenvale (Forest Song) with "The Howling Vale".

I will try to find a PvP-goup on my server doing BGs in my level-bracket. Hopefully it will minimize the time I have to spend doing BGs.
Eingestellt von Pazi um 00:18 1 Kommentar: 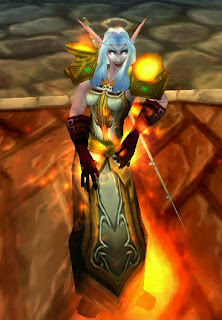 In order to level engineering (I don't want to enter BGs before I got those nice tools) I need ironore. Unfortunately the only place with ironore closest to a lvl20-toon is Arathi but I already tried farming there and those lvl30+-mobes are tightly packed and kill me quite fast (spiders use net and raptors knockback). So I have to gather copper/tinore and sell them on the AH to buy ironore. I will do this while completing all available quests in the draenei-zone - due to the midsummer festival I outleveled that zone but every exp counts :(
Eingestellt von Pazi um 02:02 Keine Kommentare:

Queen of the midsummer

So, three days ago - Pazi was lvl 13 - I decided to try to explore Mulgore and Durotar for maximum experience gain. There are two ways to get to the Barrens and from there to Mulgore and Durotar. You can use the cave that connects Ashenvale and Stonetalon Mountains or you find a way to Ratschet. The first one is a hassle because there are lots of mobs up to lvl20. Its quite easy to get to Ratschet for a lvl 13 and there is no (repeat: zero) danger. Just go to the southwest of Westfall (its easy to avoid the mobs on your way) and swim your way to Booty Bay (no mobs in the water and you don't lose exploration-points if you stay far away from the shore). If I had to make a guess I'd say it took me 10 minutes. Once in Booty Bay simply take the boot to Ratschet. I made my way to Mulgore while exploring the upper half of the barrens but then - with all the ore I minded - I had no bagslots open for anything so portet home to Auberdine and went to bed.

The next day I used the Ashenvale-Stonetalon-route to Mulgore. So, after exploring Mulgore and extinguishing the fire I thought to myself "Why don't I try to steal the flame in Thunderbluff? It will give gold/exp." (I did them on 2 of my 80s already). Surprisingly I only died 2 times, got the flame and jumped down - and survived - and got no achievement so its obviously not over 65 yards. If it is so easy why not try Ogrimmar. So off I went to the back entrance .... and died like 15 times. 2 guards before the bridge, one pat on the bridge, 2 after the bridge, 1 pat after the bridge, 2 guards before the next building, 1 pat after this, 1 guard next to a building after this and so on - I'd say there are at least 20 guards between the bridge at the back-entrance and the midsummer-fire. And since I'm only level 13 I can't fool them with hiding, can't root them and die by one hit ^^. But in the end I got the flame and portet home - I haven't seen a red-part on that gear-warning-thingy in a long time, and this time it was completely red. All items had 0 durability. But repaircosts were only 10s :D

So yesterday - level 16 now - I thought about the idea to get the Undercity- and Silvermoon-flame without losing to much exploration-experience getting there and without the help of a warlock or something since I couldn't afford it anyway. Easy... or so I thought. I used the zeppelin (which cost me 7 deaths because if you die on it and don't release the ghost you will die again after a zone-change); once in Tirisfal I release and try to run back just to see my body move away with the zeppelin and bam ... loading screen (zonechange) and dying sound and back in Ogrimmar ... again ^^ Anyway back in Tirisfall I used the Spirit Healer to resurrect me and off to Brill and Undercity. Extinguished the fire and got the flame, no death no nothing. What? Just as I went outside from Undercity I saw something and then BAM "Release Spirit". Yep, I'm no PvP-Virgin anymore, got killed for the first time by another ??-druid :D (note: another ?? tried but I could root him and run out of sight and from the looks of his gear he must have been lvl30 or something). The graveyard in Tirisfal is in the north-west (near to SM). So my idea was to swim from there to the east along the shore till I reach Ghostlands. A little later I remembered that that portal-thingy between WPL and Ghostlands probably has a meaning as in "You-can-only-enter-here-since-this-is-another-zone" ... Well, I was sure about it when I was in the ocean but according to the minimap in the middle of Ghostlands. I didn't want to give up and I didn't want to swim back ... so I drowned myself just to see where the next graveyard would be (man those 3 minutes can be long). Huh, I'm in the middle of the WPL and since I'm dead I don't gain/lose exploration-experience. Through the portal to Ghostlands and resurrect at the Spirit Healer in Zul'Aman and get the flightpoint while we're at it (I was so happy that I didn't check but I believe it's not connected since I don't have flightpoints in WPL or EPL).
It was late but I wanted to try so I went as fast as possible to Silvermoon (not much exploration). Died 3 or 4 times, got the flame, died another time, resureccted, ported, turned in the quests and earned me the achievement "Queen of the midsummer festival" and I'm now level 18. I'm so proud XD
Eingestellt von Pazi um 05:25 Keine Kommentare:

I have to admit that the first 4 levels were pretty tough. In the nightelf starter area are only a few quests that you can do that don't require to kill. So the only way to gain experience is by exploring but since there are millions of spiders and tigers you get owned pretty often. Not killing means no income (either by looting or for the quest) and that means for the first five levels you have only a few quests to get gold (actually copper at this stage).

Luckily the midsummer event startet and with it came the opportunity to make great money and to get much experience. I honored many fires, extinguished some, did the two daylies, explored all the alliance-starter-areas and did many non-kill-quests and got to level 10 easy. Even tho I did at least every starter-area once I wasn't aware of so many non-kill-quests available. Due to me exploring like every stone I even learned some new quests that are way off the road (great to know for my loremaster-toon).

I mined copper and tin like mad but all for naught. You see, engineerings needs other materials too. Linen and wool in particular. And since I don't kill mobs there is no way to get those materials (if you get lucky you can get them from chests) other then from the AH. And the prices on this server are ridiculous. A stack of wool for 5g .... thats the price for runecloth on my server. Since I will always need linen/wool/etc. and since I don't want to farm copper for 1h just to by 1 stack of wool I cheated ... kinda. I created a death knight, the opposite of a pacifist ^^
With 2 hours invested to get the death knight a) some nice outfit b) out of wpl and to stormwind and c) into stockades I now have a char to farm linen/wool/green items.
I'm still unsure if I shouldn't have done this. I try not to over-abuse the death knight but with no other char and no contacts on this server I forsee a lot of problems later on (I need an alchemist).
Eingestellt von Pazi um 04:30 Keine Kommentare:

This is a blog mostly about my nightelf druid Pazi
Eingestellt von Pazi um 02:06 Keine Kommentare: